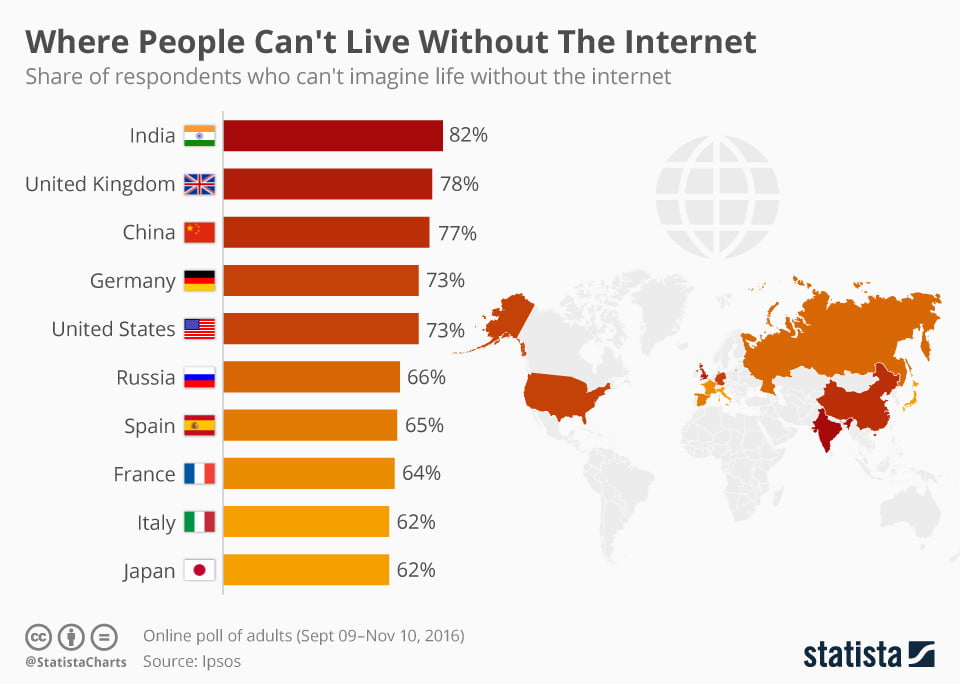 In today’s world, internet is considered to be one of the basic needs. Though not officially, it is true for many people. After food, clothing, shelter and education, internet seems to be next on the list. If you don’t agree with this statement, close your eyes and try to recall one day of your life (recent life) when you have gone without the internet. Most probably such a day doesn’t exist. Can you imagine a day when you’re unable to access social media, shop online, listen to songs or watch a TV show or even WhatsApp your friends? If not, congratulations! You are a one of the 82% Indians who say that they cannot live without the internet.

In a study conducted by Ipsos, 18,180 people were quizzed across 23 countries, to gauge their public attitudes towards technology. More than 2/3rd of the people said that they couldn’t imagine life without internet.

Out of the 23 countries, India had the highest number of people (82%) who said they cannot live without internet. India stands first in the list beating countries like USA, UK and even China.

This trend has only recently proliferated, with the number of people claiming that they would be unable to cope up without internet having gone up since 2014. Apart from the fact that India is second highly populated country after China, several other factors are also responsible for this amplified trend.

Such other reasons are;

Atlas SoftWeb is not just an Offshore Development Center, it is your own Web Design Agency.